Below are the House Rules we used for my recent Birthday Bash, a 4th Edition game for my 40th Birthday, a 25,000 point extravaganza between the Empire and Orcs & Goblins. 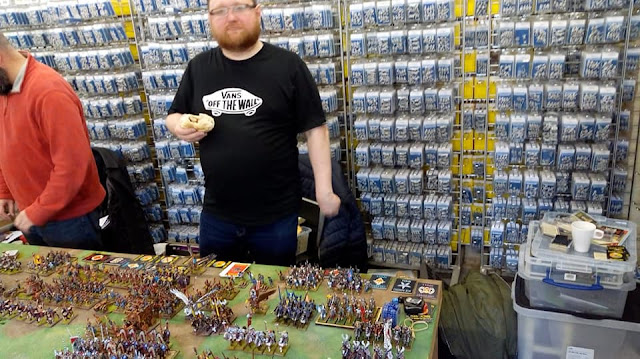 Before that though I'd like to thank the following people.

Venue/Host
A very Special Thanks to Diane Ansell and Foundry for hosting us, fantastic hosts as ever and they even supplied a *Surprise Birthday Cake (I believe this was baked by Lucy but I was too busy being thoroughly chuffed and embarrassed in equal amounts to remember).
Guys, I have made some amazing friends in the Oldhammer community and I am so grateful to you all for attending, it meant a lot to me that you flocked from all over England and Scotland to make this game happen. You're the best!
Now, on with the show...............................

Each Army will be comprised of several Contingents under the command of individual Contingent Commanders.

Each Army will have a Supreme Commander. For the Empire this will be the Emperor Karl Franz. The Orcs and Goblins can be lead by Morglum Necksnapper (but it does not have to be). Each of these Characters may confer their Leadership to any Units/War Machines/Characters within 12" in their Army regardless of Contingent allegiances. 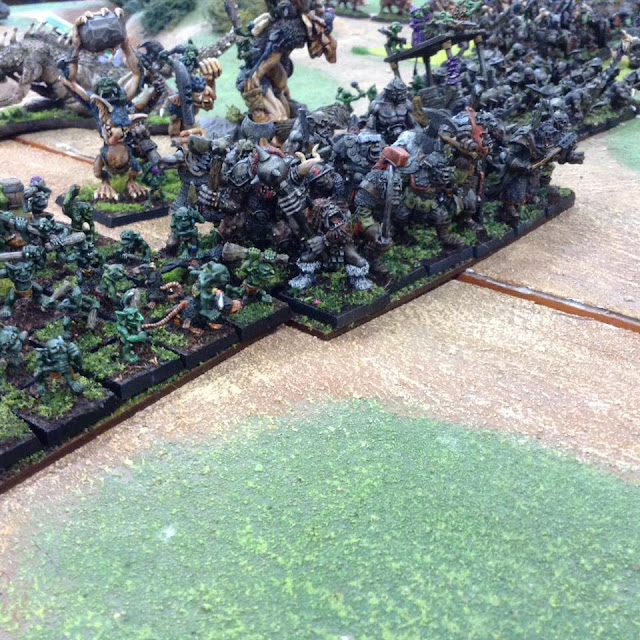 Each Army may include an Army Battle Standard Bearer. For the Empire this will most likely be Ludwig Schwarzhelm (although it does not have to be). The Orcs and Goblins are free select an Army Battle Standard Bearer following the normal rules. The Army Battle Standard Bearer will allow Units/War Machines/Characters within 12" to re-roll break tests in their Army regardless of Contingent allegiances. NB: Whilst the Supreme Commander counts as the Contingent Commander for their Contingent it is entirely possible Characters of this magnitude may not fight with their contingent and it would be remiss of them not to delegate command to a trusted lieutenant. Therefore, a Supreme Commander (and ONLY a Supreme Commander) may delegate command of their Contingent to another Character. That Character then gains the ability to confer thei r Leadership to any Units/War Machines/Characters within 12" of their Contingent. 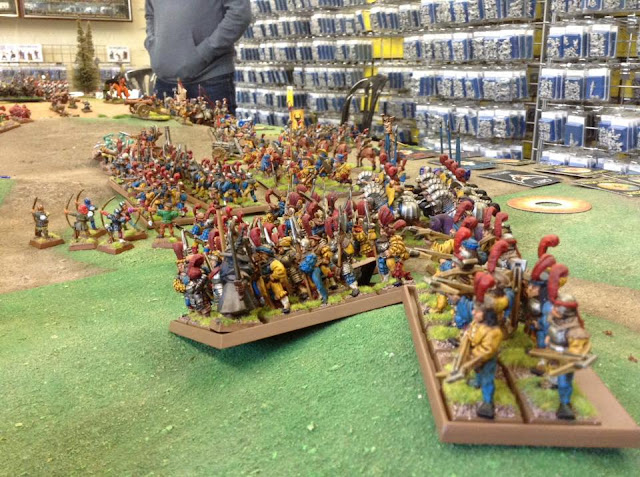 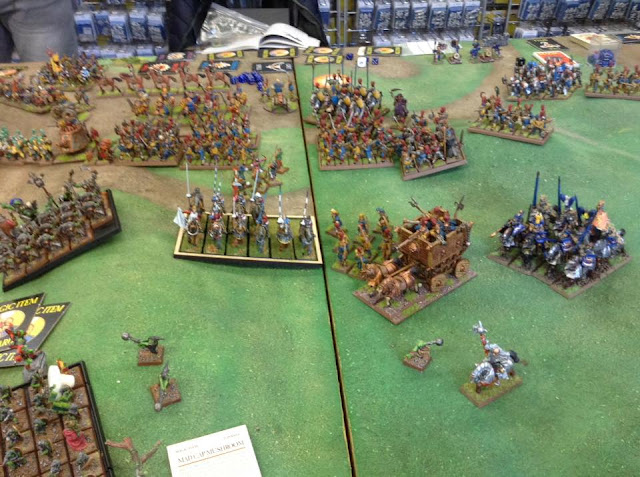 The Contingent Commander can be any Character or Special Character allowed by the list (and the Contemporary Special Character List). This Character automatically gains the ability to confer their Leadership to any Units/War Machines/Characters within 12" for their Contingent. This ability is not usable by a different Contingent. Similarly, each Contingent may include a Contingent Battle Standard Bearer that will allow Units/War Machines/Characters within 12" from the same Contingent to re-roll break tests. Each Contingent can include any of the rank and file to the limits listed. For example, all Orcs and Goblins contingents can include Black Orcs, Big'uns, Netters and Squig Hunters but only one unit of each per Contingent. 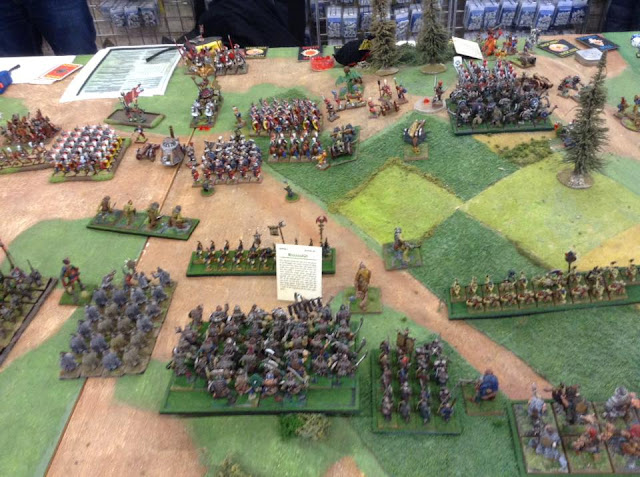 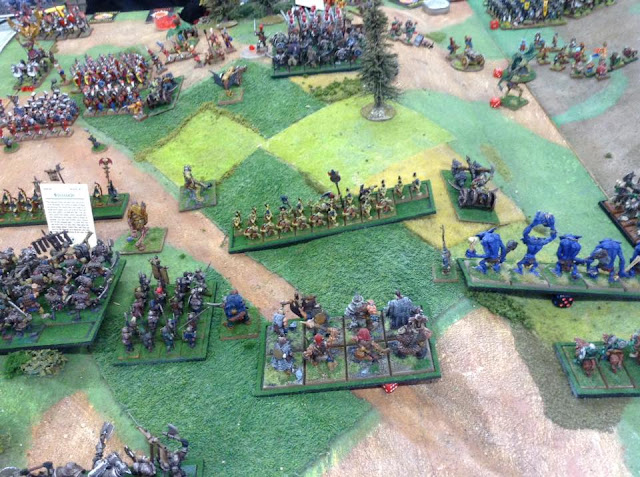 Looking at the four Special Character Elector Counts they all share a stat line three share a price so, should a Contingent Commander of Nordland (me me me), Ostermark, Talabheim/Talabecland, Stirland or Wissenland/Nuln want to represent their Elector Count then they can do so for 90 points (including heavy armour (+3 points), a warhorse (+3 points) and warhorse barding (+4 points)). They have a mixed profile between a Lord and a Hero, except they seem to have a lower initiative than either! Each has to be equipped with a Runefang and can have one other magic item - yes, just two magic items not three! They can be a General but they aren't a Lord level Character so they're a bit of a gamble and Orc Warlords will have an advantage over them in hand to hand combat. NB: Elector Counts count as a Lord Choice. 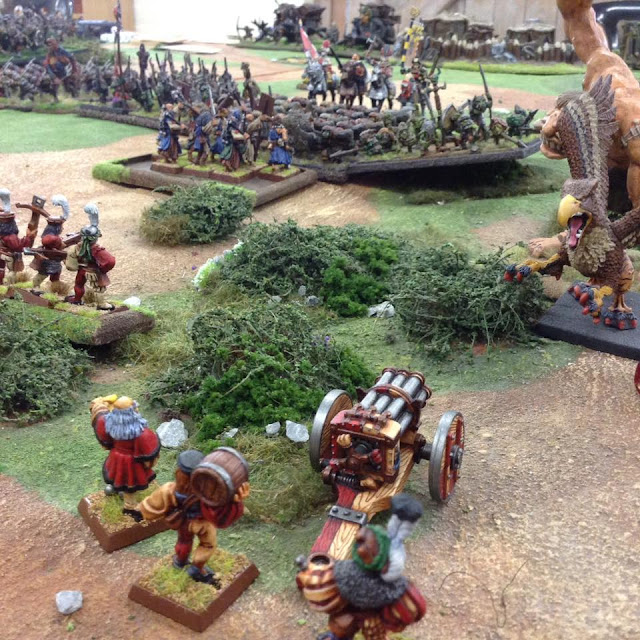 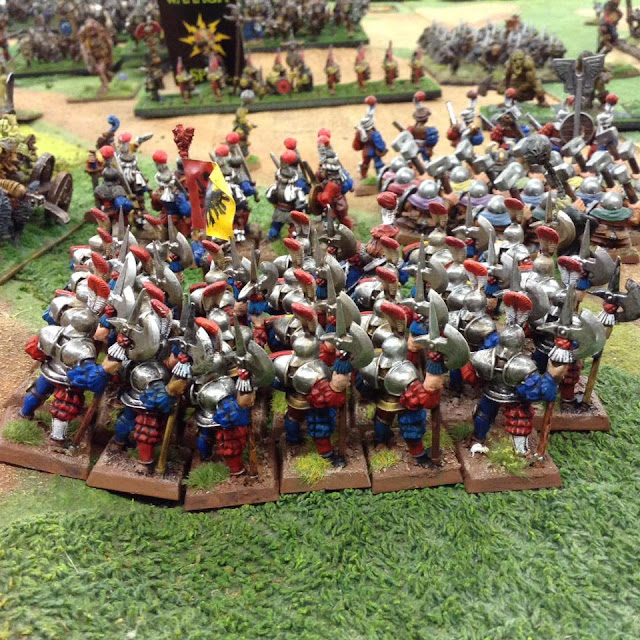 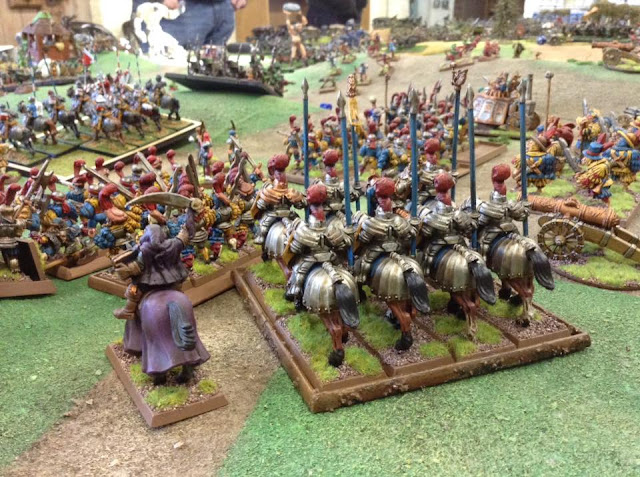 The Empire army may include Dwarf (see Warhammer Armies: Dwarfs) and Halfling Characters (stats below)

Both armies may include Ogre Characters (stats below). 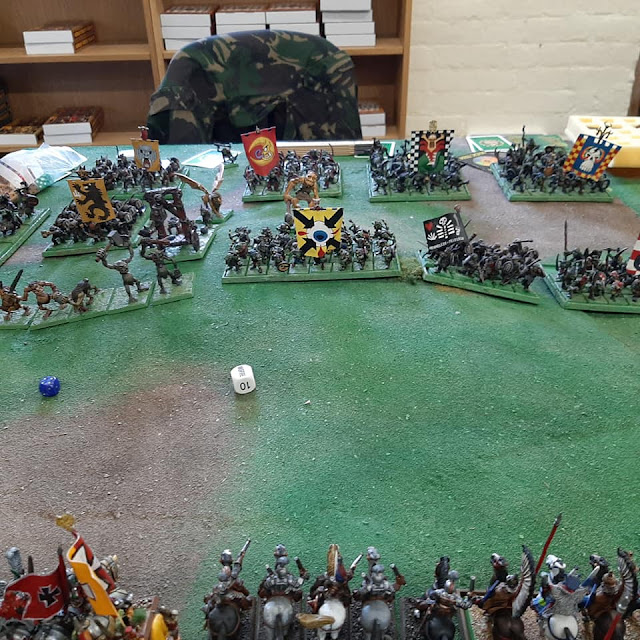 The Supreme Commanders can "dish out" the following Magic Items to their respective sides. 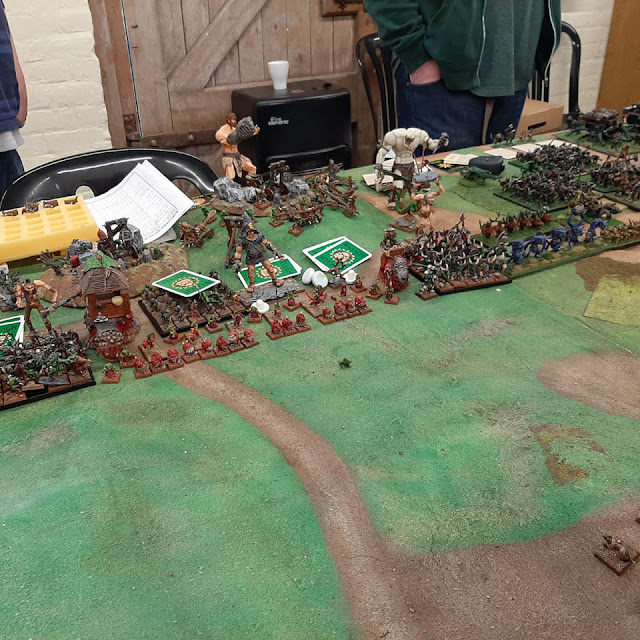 On the whole these are Special Character Magic items with an approximate equivalent for the opposite Army (for example, The Hammer of Sigmar Vs Morgor the Mangler or The Silver Seal Vs The Collar of Zogar). The Supreme Commanders will let you know what items they have delegated you. You do not have to take the item but you have the option. If you do the magic item is paid for in the usual way. 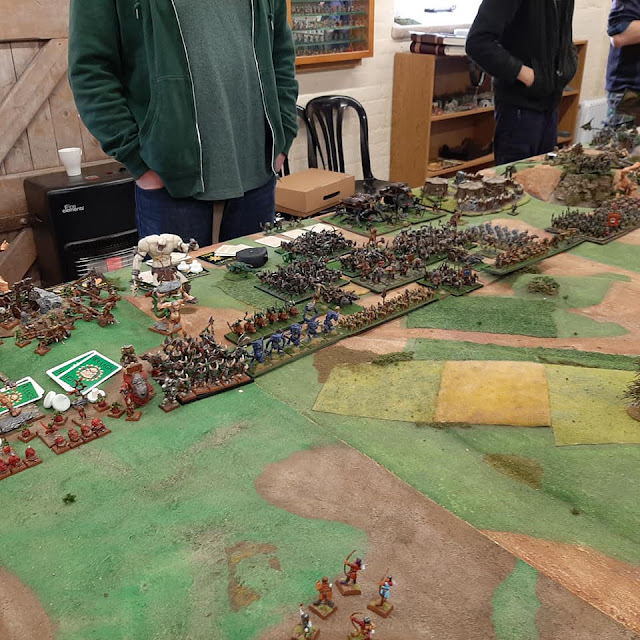 The Empire Army can take 1 Runefang per Contingent (up to 9) in the Empire Army (they must be carried by the Elector Counts) plus 1 for Kurt Hellborg and 2 more may be carried by any other Character nominated by the Empire Supreme Commander representing Karl Franz presenting the worthy with the honour of carrying a Runefang to battle. This makes a possible maximum of 12 Runefangs. These will be paid for in the usual way. 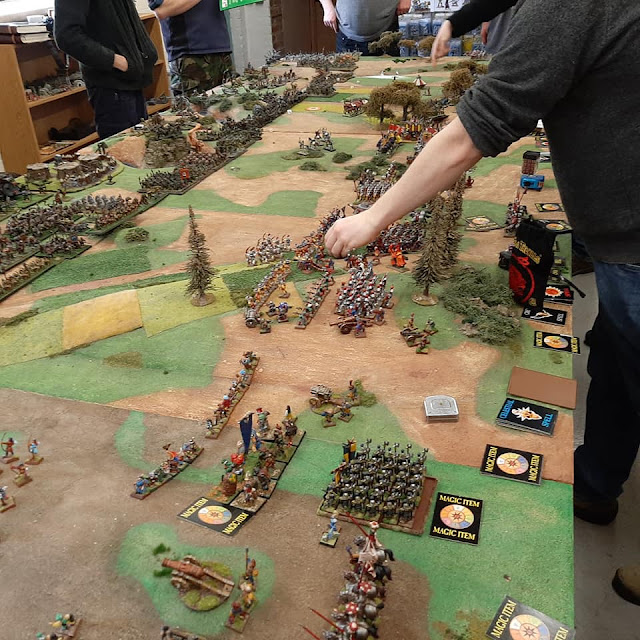 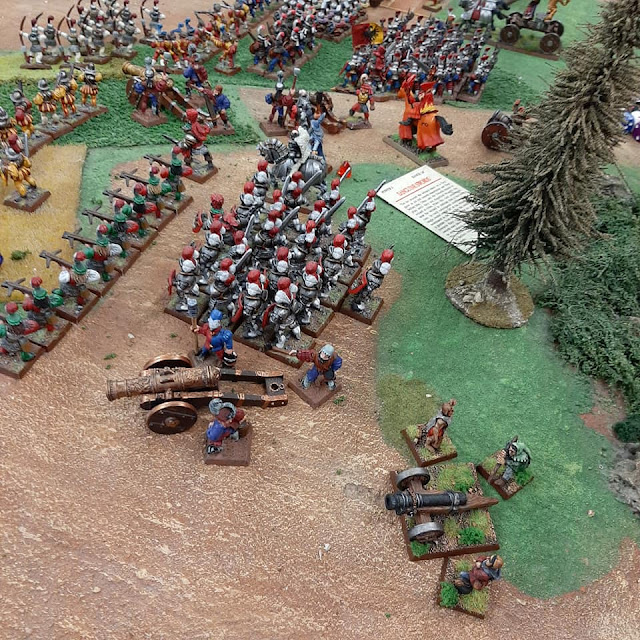 Wizards may roll on the Scrolls & Familiars table (below). Each roll costs 25 points paid for from the character allowance. Most rolls are of a Dispel Magic nature but there is a chance they will get a Power Scroll or a Familiar (NB: Familiars must be represented by a separate model). Each Scroll takes up a Magic Item slot so 1st level Wizards may only have one roll. Level 2, 3 or 4 Wizards may have up to two rolls. You can have multiples of the same item if that's what you roll. 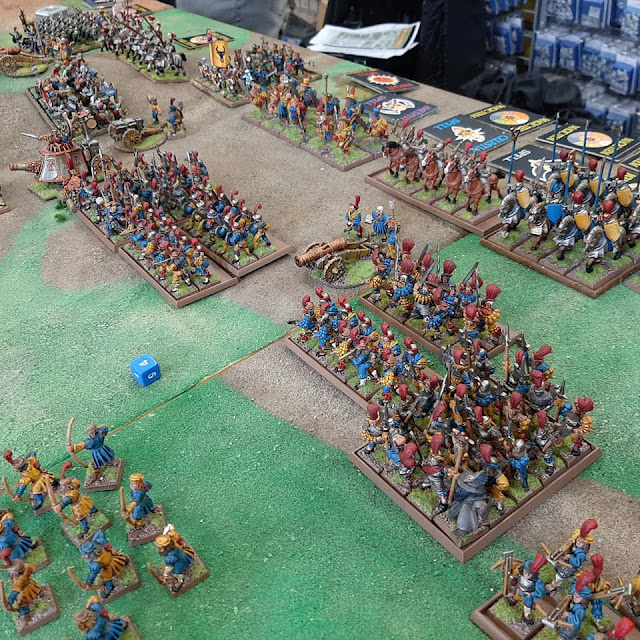 NO OTHER MAGIC ITEMS MAY BE BOUGHT AT ALL.

On the day you will get a dealt a random hand of Magic Items FOR FREE that you can allocate to any eligible members of your contingent. You will be able to put back any of these cards for random replacements ONCE. This keeps magic items unique and very difficult to build a battle plan around. 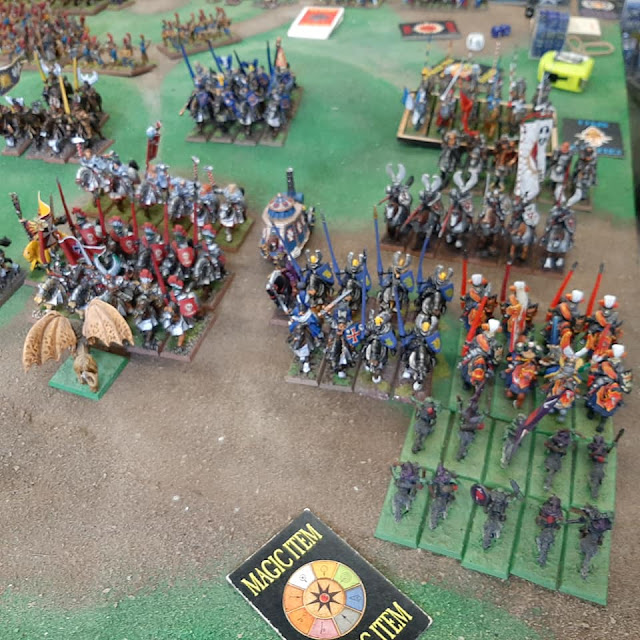 Each side will have a full deck of Winds of Magic Cards. A third "reserve" deck will also be in play (more on this later).

Total Power will work exactly the same as per the rules, no change.

Drain Magic changes. Drain Magic works as per a Destroy Magic Scroll so it can be used once per turn to automatically dispel any spell being cast. There is also a chance it will destroy the spell.

All other cards work normally except that no cards are "Retain in Hand". Use them that turn or return them to the deck. 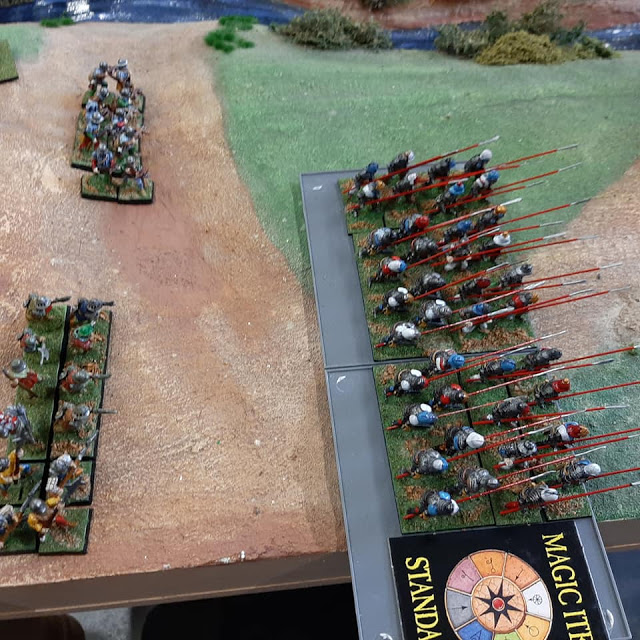 A third "reserves" deck will also be used, it will be the 5th Ed deck to distinguish it from the other two. This deck will be used to provide additional Winds of Magic cards from such Magic Items as the Chalice of Sorcery and it will provide the power cards stored in the Rod of Power (the user will simply surrender the cards he is storing back to the regular deck and replace them with power cards from the reserve deck). All reserve cards will be returned to the reserve deck once used.

Multiple Spell Decks should be used so as not to limit either the Orc and Goblin player to 10 Spells or The Empire to 10 Grey Spells. A good number would be 1 per 3 wizards or 1 per Player. One interesting point noted by myself and Harry Howells was that the Orc and Goblin deck from 5th Edition is pretty much the same deck so this can be used to substitute in. 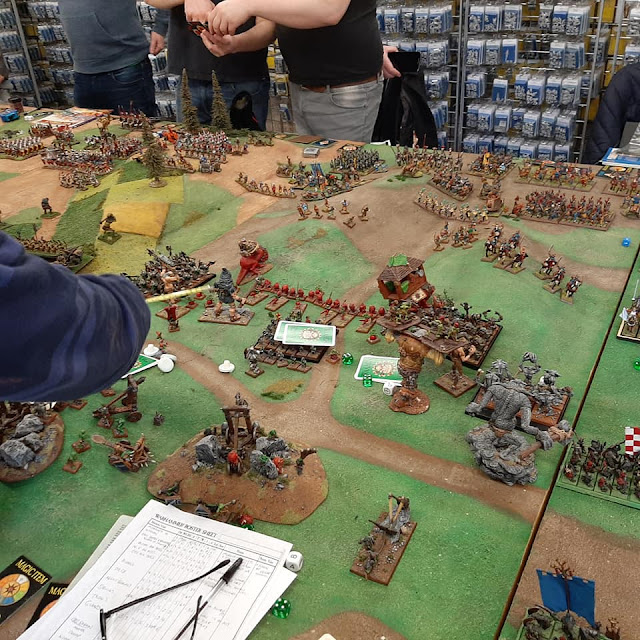 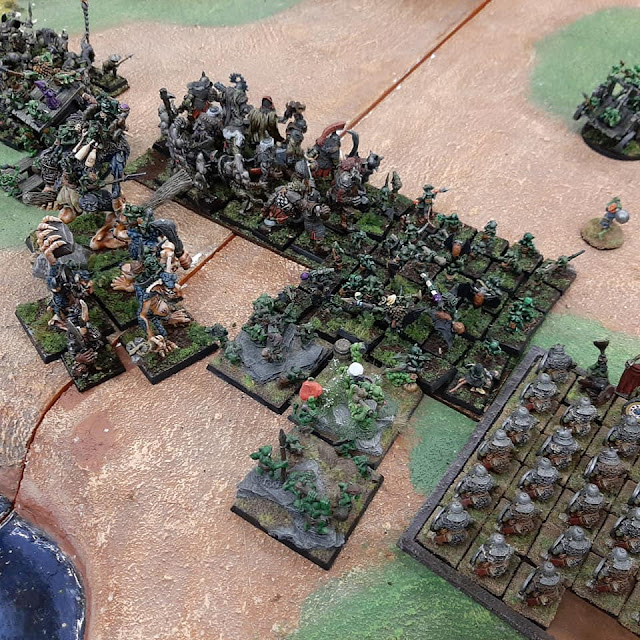 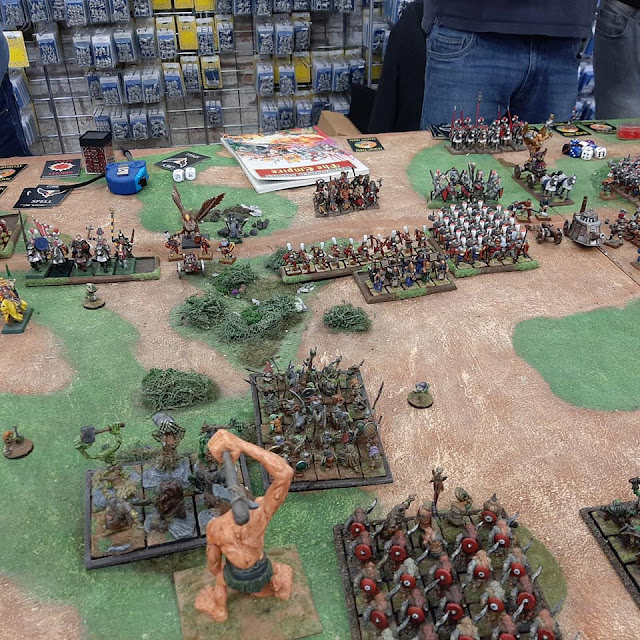 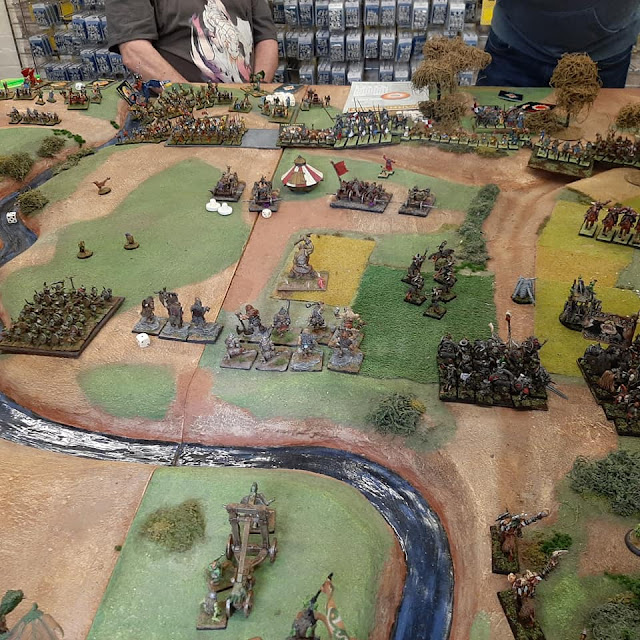 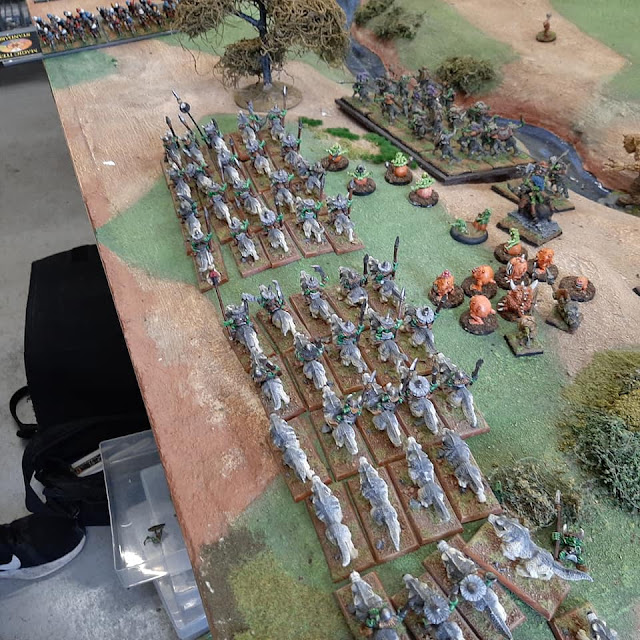 Thanks once again to all for attending and to you humble reader for getting this far (if indeed you have).

Feel free to make use of these ideas for the basis of your own big games.