So, it's been a while since my last update.

Life does seem to have a nasty habit of getting in the way and for me this was Christmas and the fun that Financial Year End brings (yes, I'm in Finance ZZZZZZzzzzzzzz).

So, when last I posted I'd completed 1000pts and this was back in late October/early November. Now I did actually manage to finish my 500pts for November and I even posted some photos to my Facebook account but I didn't post them here for shame! So, this update is a double hit, I'll start with Novembers offerings and then show you January's 500pts which brings me up to 2000pts of Undead. 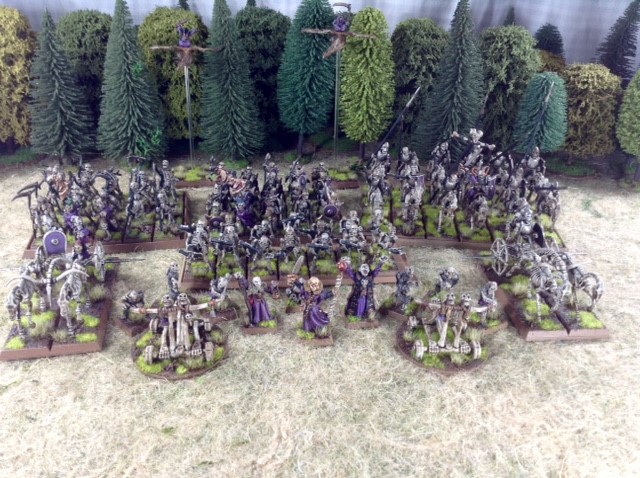 Hold on, November and January - where's December?????? My fellow protagonists and I decided to take a break in December to allow for life to happen. I'm back at it and I'm sure the others won;t be far behind.

Lothar paced about the room, the Master would be joining them soon and he didn't feel his army had been fully assembled nor had he managed to find that damned scroll!

A beastly screech drew Lothar's attention to the window, he strode over and looked down into the court yard. The Carrion had returned from the scavenge hunt, looking for victims for ritual sacrifice for their spells of summoning. 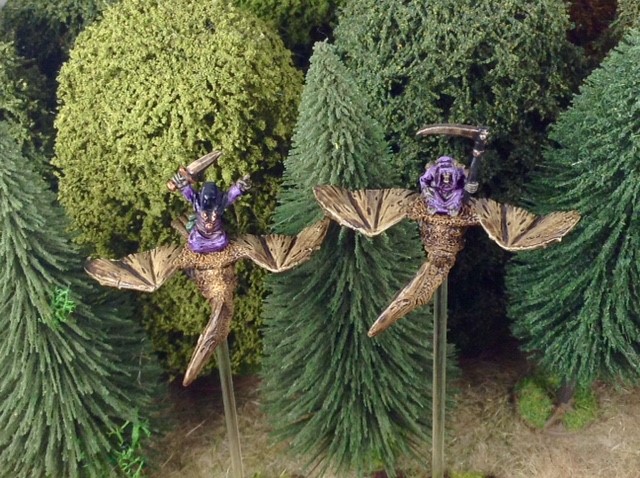 Below them Klein was busy summoning extra Horsemen to add to Krom and his Doom Riders. 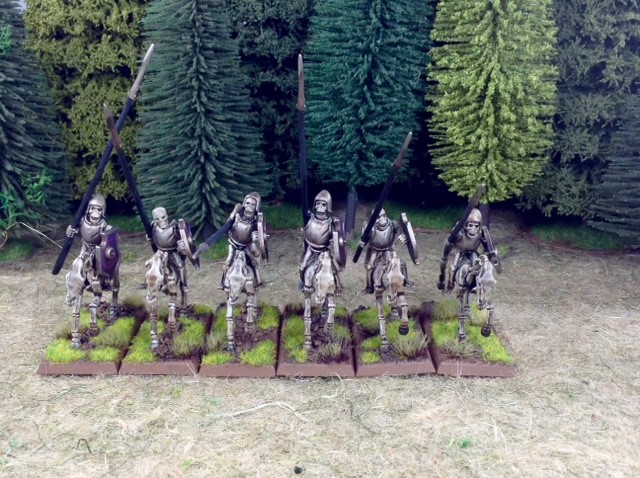 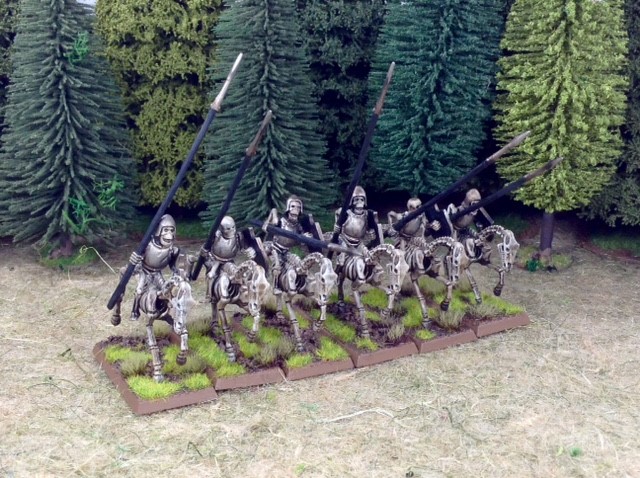 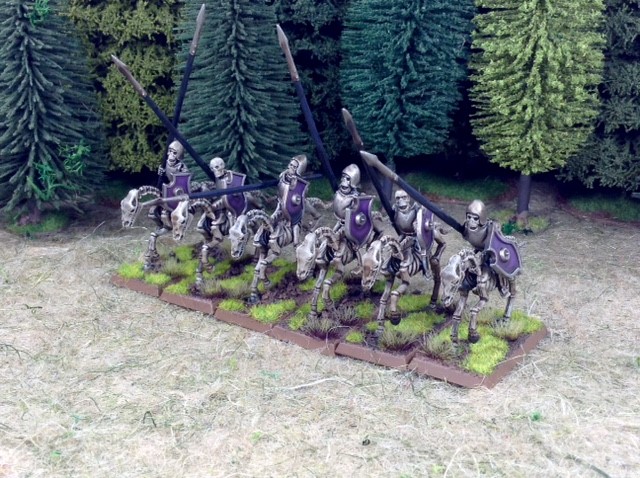 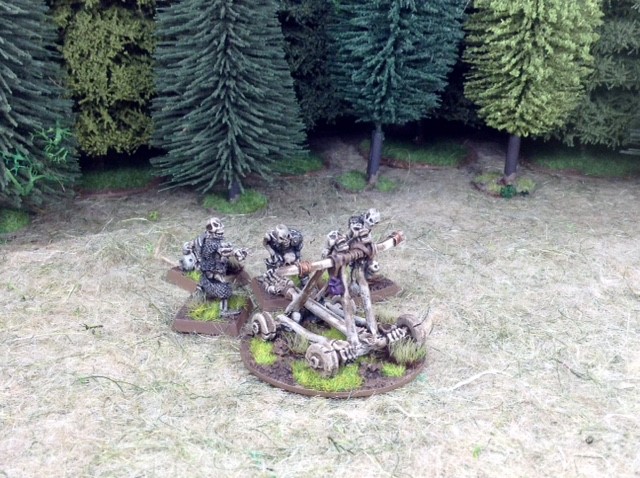 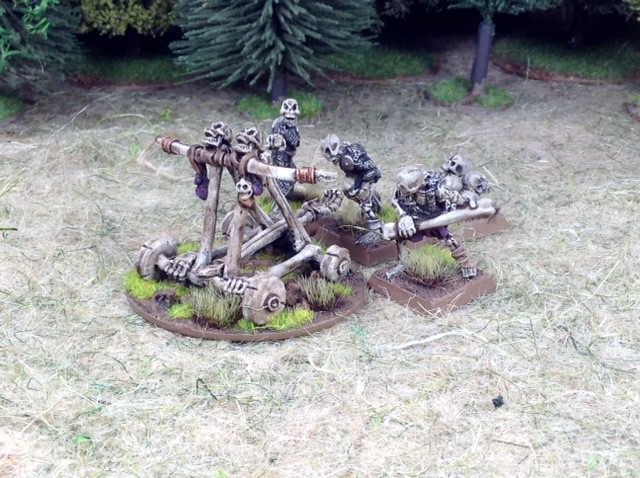 Lothar looked to the ramparts, stood on guard were the remnants of the Gabriel's Fiorento Dead Eyes, a former band of Tilean mercenary crossbowmen that had fallen in battle many years before, the name seemed even more appropriate now that Lothar had brought them back to unlife. 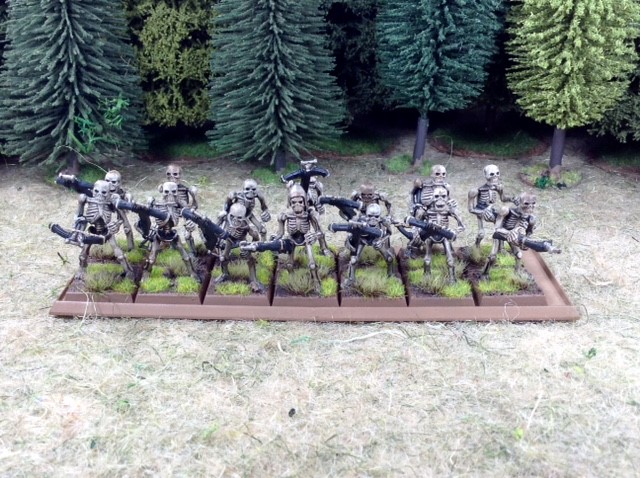 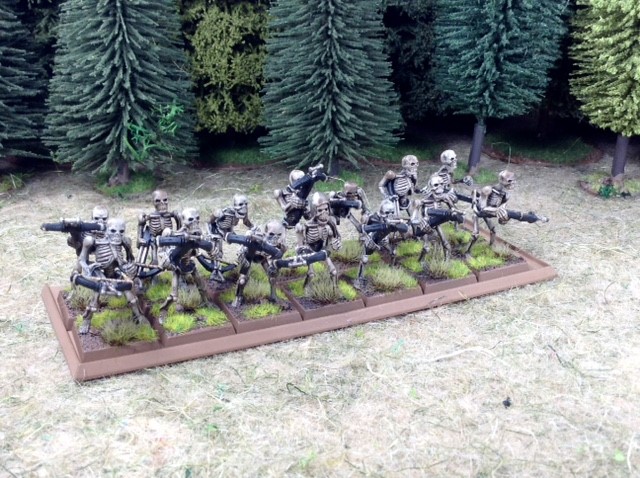 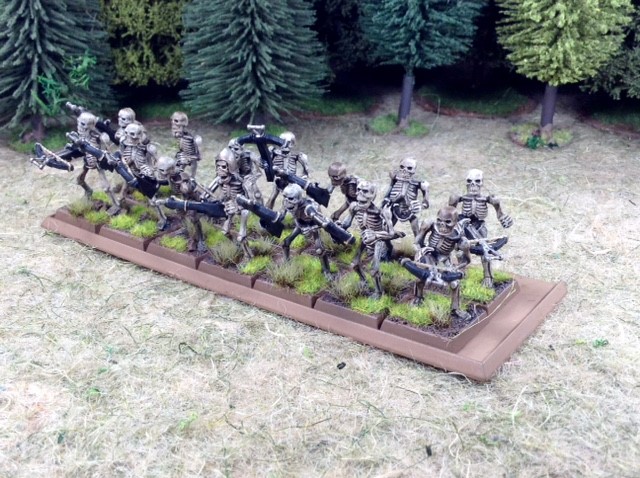 Yes thought Lothar,the army was building nicely but lacked numbers and anything to deliver a hammer blow. Just as Lothar's attention was returning to his hunt for the elusive scroll there came a knocking at the gates followed by a familiar voice.

Lothar shivered, if he hated Klein then he hated the owner of this voice even more.

"Let me in Lothar, I have a surprise for you"

Lothar gave a mental command to open the gates and several skeletons did just so and in strode a man with billowing clothes. 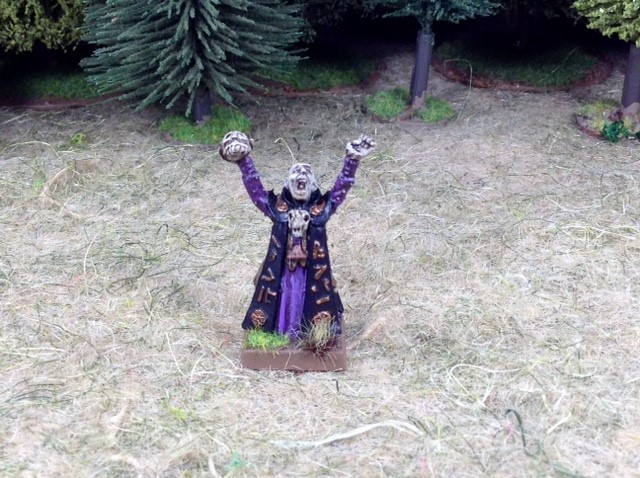 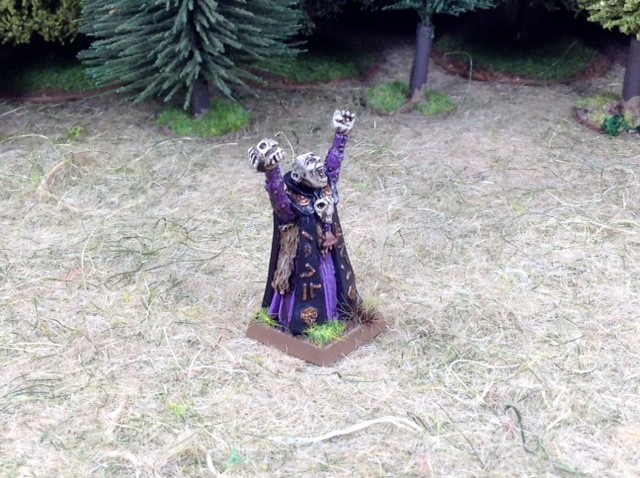 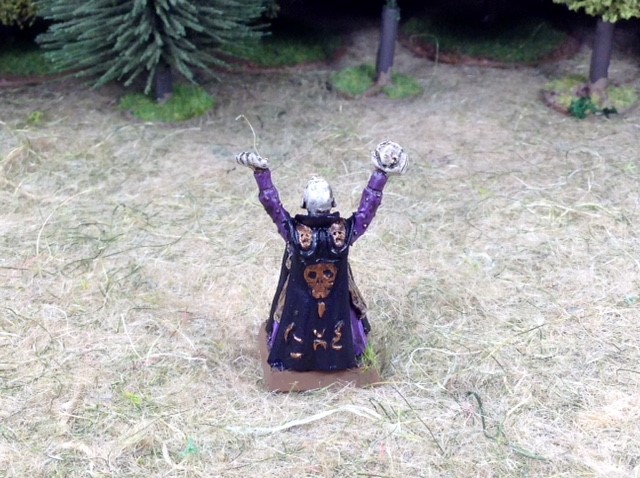 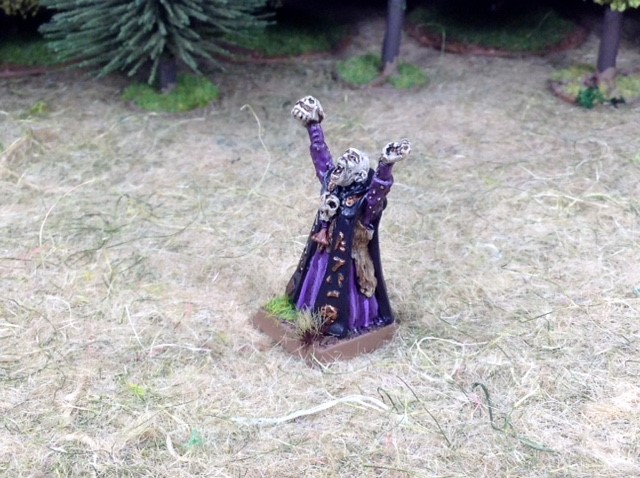 "What do you want Großeins?" Lother shouted from the window.

Großeins was a former actor who had a flair for the dramatic, he was all candles and rituals where a simple summoning would suffice. He had fallen to the dark arts in his pursuit of knowledge and a captive audience. This was the danger of teaching lesser men to read......................................

"What I want Lothar is to join your party, ya?"

"Why?"demanded Lothar, "What can you bring to the table?"

"Simple, I can bring you these"

Großeins beckoned into the gloom on the other side of the gate and with a rattle of bones two chariots rolled in to the courtyard. 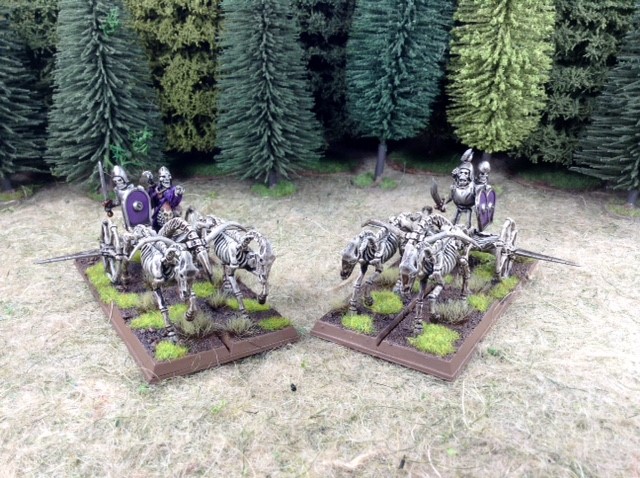 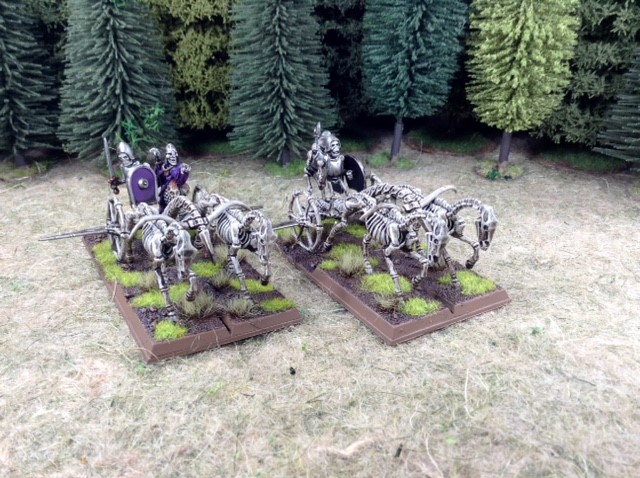 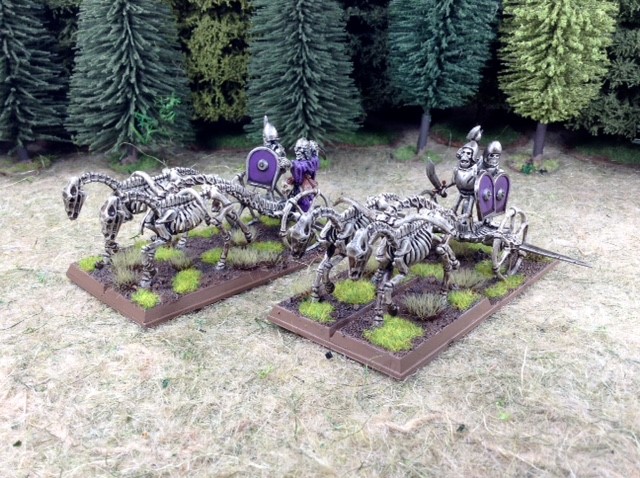 "Take Großeins to the Graveyards of Middenland, I want some "fresh" recruits". 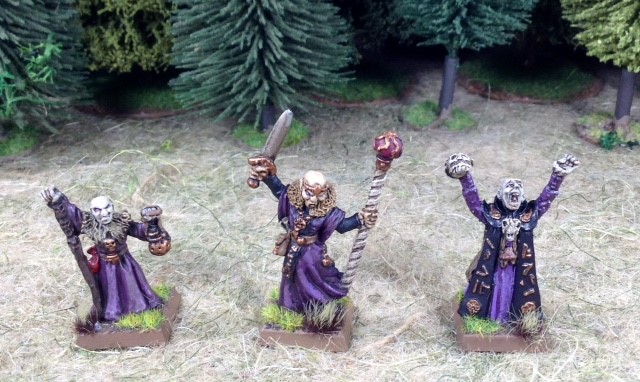 I've decided to add at least one more month's worth of recruits as I'm not sure I have enough Rank & File and I also still have a number of units to finish, as well as Dieter before I have all of the Undead done for the "Revenge of the Doomlord" Scenario I plan to run at BOYL2019.

Thanks for stopping by and reading my drivel, any comments you may care to leave will be gratefully received.
Posted by Snickit at 15:21:00