I guess you could call it ironic. 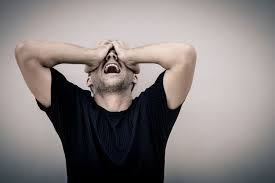 I post a Blog entry about not having time to paint and lo and behold I don't find the time to follow up the post with an expansion on the topic.

Until now that is.

There was an awesome amount of interest in my little idea (my most ever read blog posting!) but some people wanted to take it in different directions which I have no issue with at all solongas it doesn't stray too far from the initial idea

So, here are the expanded guidelines:


I hope that covers all bases and if not then ignore me and do you own thing, No one died and made me king after all!

So, what have I finally settled upon painting and why?

I was originally going to do my Nordland Empire Army that is mainly made up of "Casting Room Miniatures" Renaissance range (http://www.castingroomminiatures.com/collections/renaissance?page=1) but there was some interest expressed in doing an Empire force. So I backed down.

I chose Dwarfs and suddenly more and more people started being interested in the idea, three of four of which chose Dwarfs too so I thought what the heck, let's go back to Empire.


It's my main reason for gaming.


For those of you who don't know my older Brother is the Oldhammer Legend "Erny" of "Erny's Place". When we were growing up, and Ern dragged me into the hobby, we had 3 main armies we used: Orcs and Goblins, Wood Elves and Humans that were originally deployed as Bretonians but morphed at one point or another into Empire (I'm sure Erny has mused on this subject at some point). We did also have a smatteirng of Skaven (we lacked the funds to build these up into a significant army) and Undead. 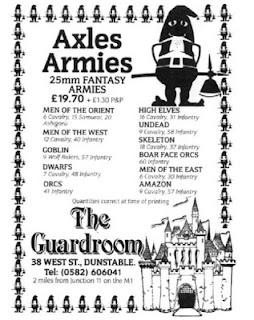 Like most others of our age group (I was pre-teen and Ern was early to mid teen) our forces were made up of Heroquest minis (both the original and Advanced flavours) Fantasy Regiments, a couple of Regiments of Renown,a few metal command groups, a smattering of metal citadel and marauder minis and quite a few non GW minis picked up from our local Gaming Shop (the legendary, but sadly now departed, Guardroom in Dunstable that advertised in the pages of White Dwarf in early issues). These troops were mounted upon squares cut from card that quickly got warped and damaged at the corners. 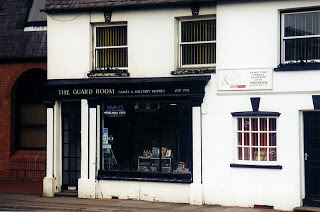 These troops were joined shortly before the release of 4th edition with a few miniatures of the new Empire range, namely Knights Panther and Marauder's Flagellents (still my favourite Flagellents GW have ever produced).

It's this old Empire army of Erny's that I want to imitate. My "Casting Room Miniatures" figures will be my non GW infantry and will be mounted upon laser cut MDF (the cardboard route, whilst nostalgic, does not appeal). They'll be joined by a small unit of Flagellents (well, 8 as per the list) and a unit of Knights Panther (They have to be Knights Panther, anything else won't give the correct nostalgic whiff).
This whole thing, using small armies and using 3rd ed, is about pressing the reset button and returning to basics. For that I need an army that feels like it did when I first started.


I hope Erny sees it as a compliment, that's certainly how it's meant.