A little self played game - The Battle of Dünstenstadt.

The Orcs advance untroubled by Animosity, nor are the Troll's affected by stupidity. Grumblebert Rumpystink stomps into the Village Square, with the Shamen Lord Snotnoze Spiderlicker skulking behind. 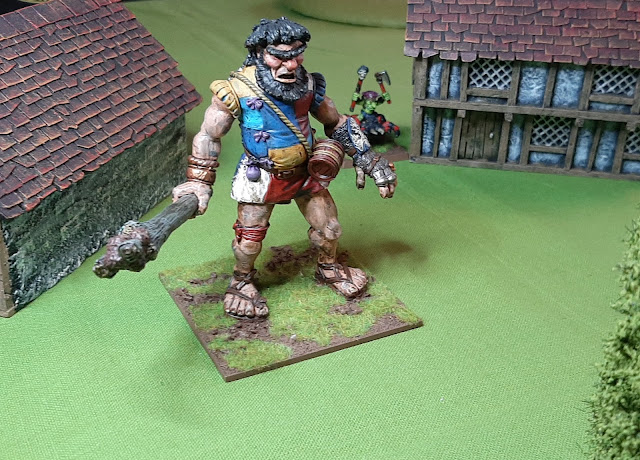 The Warta Boyz advance ahead of Da Shroom Eads to screen for party poopers. 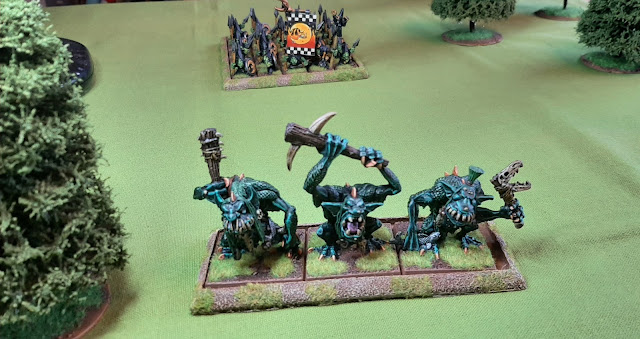 The Orcs and Goblins cause no casualties with their warmachines but there are no misfires.The only effective magic comes from the Bright Wizard Bernhardt Hitzemann. From up on his hilltop vantage point he sends firey projectiles from his Staff of Flaming Death to score a burning wound on one of Da Warta Boyz, the Trolls pass the resultant panic test but Grohl the Troll has had his regeneration mucked up by the fire! 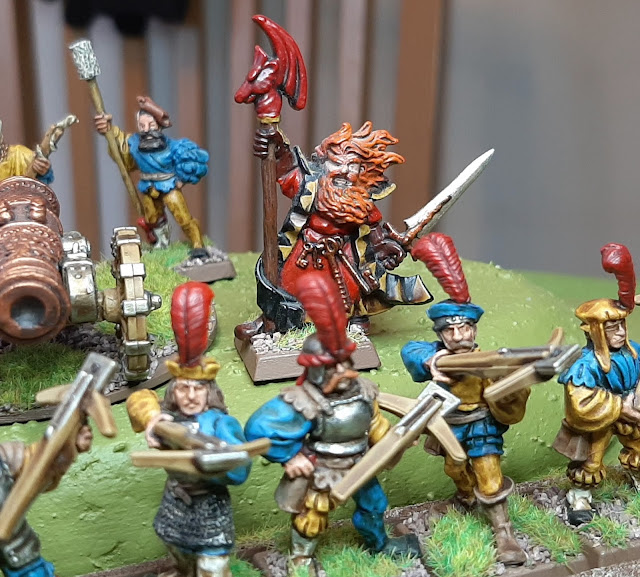 The Empire battle line shuffles forward to allow the Kislev Horse Archers to redeploy and the Nordland Knights to give the Trolls something to think about.

Ghrol the Troll falls to Kislev Horse Archer, Crossbow and Hand Gunner shooting, unable to regenerate his wounds after being burnt. Drohl the Troll, having not been burnt, recovers two wounds and gets back up to stand alongside Flohl............... 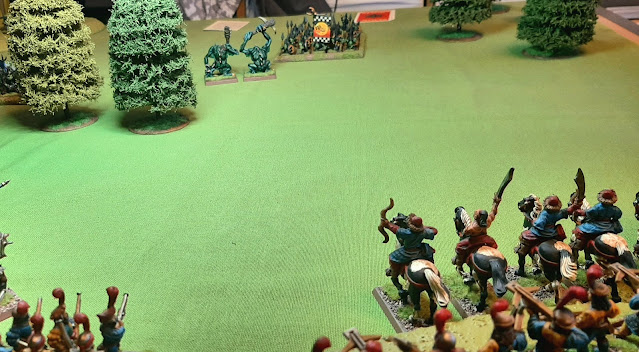 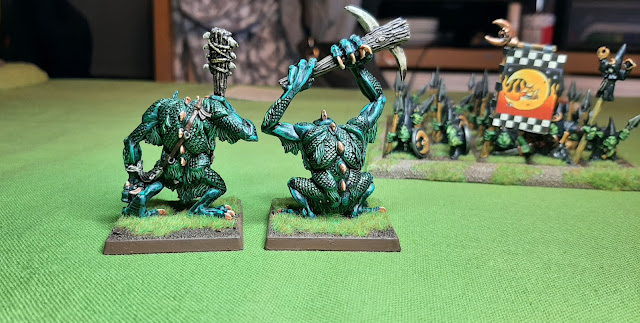 Killing 4! (They pass their panic test)

Da Shroom Eads, Da Ead Takaz and Da Stupendus Stunntie Stabaz all fail their animosity tests. Whilst the latter two squable, Da Shroom Eads surge forward, past the rallying River Trolls, they may just deliver their Fanatics towards the heart of the Empire Army at this rate!

The Orc Artillery manages to kill one Hand Gunner. One Doom Diver disables the device taking all of this and next turn to fix and the small Rock Lobba falls apart and kills it's crew in a mishap with the firing mechanism!

Bernhardt uses his Staff of Flaming Death on Da Shroom Eads but Popit the Night Goblin Shamen plays "Rebound" at the Bright Wizard who "Escapes" to the Realm if Chaos which could well be a fate worse than death!
Heinrich Tierschützer, an Amber Master Wizard, is panicked by the fleeing Archers and heads towards the rear of the army.

Old Boris misfires and will take a while to fix. 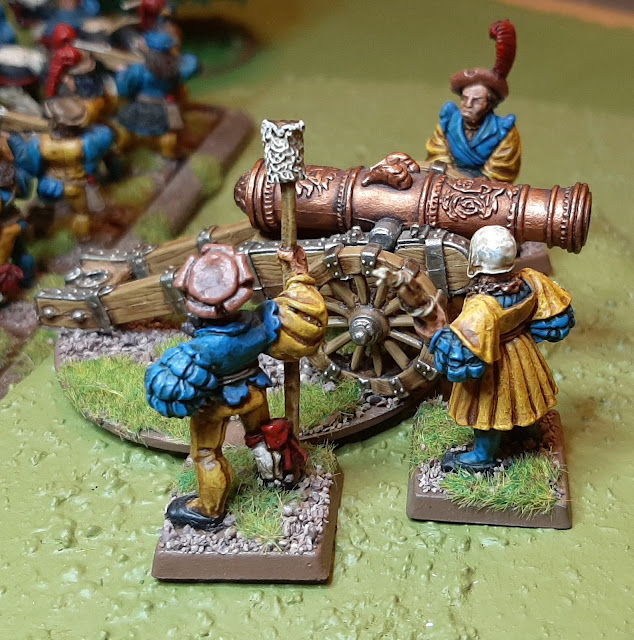 The Kislev Horse Archers, Crossbowmen and Hand Gunners fail to kill enough Night Goblins to panic them, only felling 5.
The Pistoliers take a wound off of Grumblebert.
A bad round of shooting for the Empire - the Cannon malfunction could be very painful indeed......................

Bernhardt the Bright Wizard returns from the Realm of Chaos 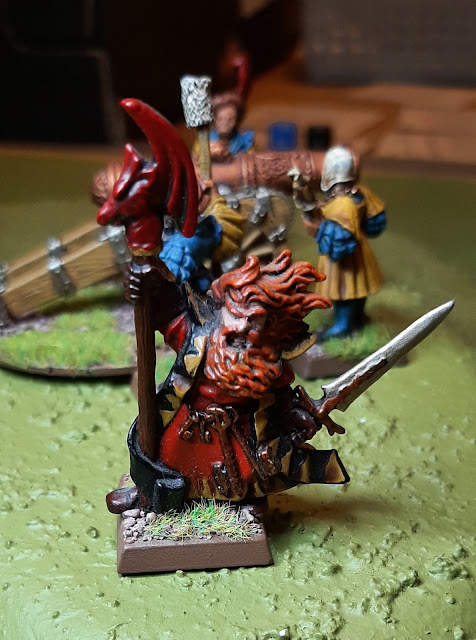 Popit releases the "Waaaaaargh!" across the battlefield. All of the Orcs and Gobbos beat their chests and scream at their enemy. Amazingly both Wizards manage to survive. Bernhardt has survived both rebounded fiery death and an angry green energy attack - he rolled a 1 in 6 chance and survived!

If he lasts the battle he'll be deserving of a medal.

Bernhardt then burns another Night Gobbo with the Staff of Flaming Death and they start to panic!
This Bright Wizard and his rather grim Magical Staff are the Empire's man of the match - he's stopped the whirling balls of death............

The Power of the Waaaaaargh! makes the Night Goblins think twice, the reroll keeps them in the game.
Bernhardt gnashes his teeth in frustration and Count Frederiks is heard to utter many expletives. They've thrown the kitchen sink at that unit of Night Goblins and failed to halt them! 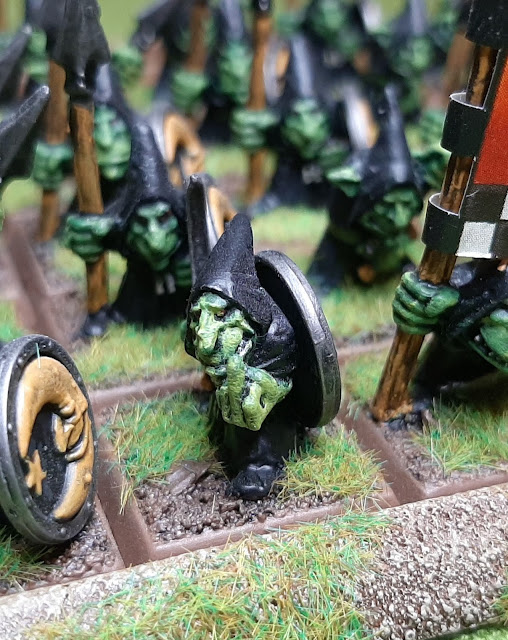 The start of the Magic Phase saw Popit fail his Waaaargh! Test and forget his only spell.
Snotnose summons the Hand of Gork to chuck Da Shroom Eads into combat with the Kislev Horse Archers.
Bernhardt burns up a Fanatic before Snotnose drives Fireball from his brain in a Mental Duel.

Count Frederiks moved away from the Fanatics.

The Pistoliers fail to hurt Grumblebert Rumpystink but the Archers manage to wound him twice.

The Handgunners fail to bring down a Fanatic but the Crossbowmen succeed, leaving just the one alive. 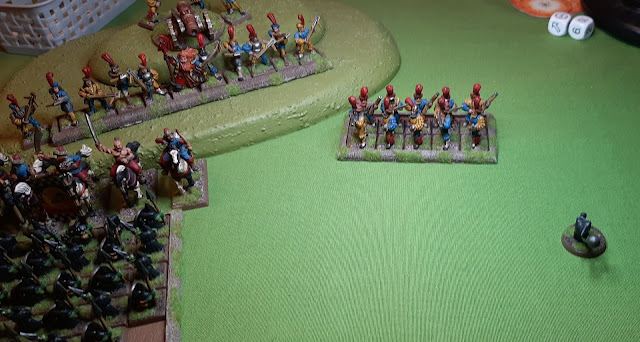 The Horse Archers flee and the Night Goblins pursue into the crossbows.

No animosity struck and the Trolls kept moving too.
The last Fanatic strangled himself with his own chain.
Grumblebert Rumpystink charges the Archers who flee but not far enough to out pace the raging Giant. Heinrich is in a lot of trouble here. 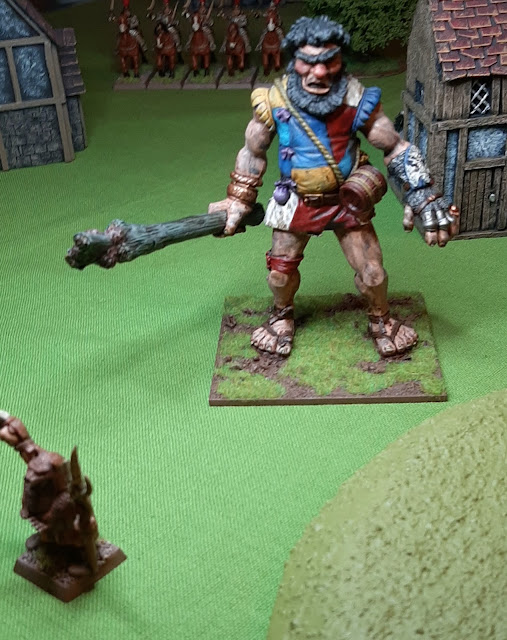 The Doomdivers have mixed results, killing 5 of the Fredericksburg Militia but also 2 Big''uns - Grimskull is not going to be impressed...............

Bernhardt confidently challenges the Night Goblin Shamen Popit, but sadly his over confidence is his undoing as Popit slides a dagger into his heart before he can bring his sword to bear.
Da Shroomheads fail to kill any of the Crossbowmen who slay a Night Goblin in return. Despite higher ground the Crossbows are beaten and they flee with the Night Goblins hot on their heels. 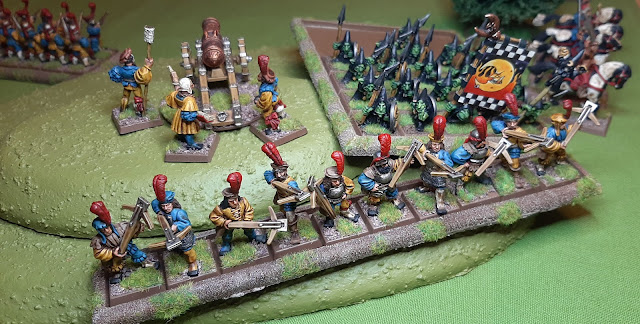 Snotnoze's brain felt funny but he kept his head. With him unable to cast, Popit not having any spells left and the Empire Wizards dead or fleeing, the magic phase was a washout. 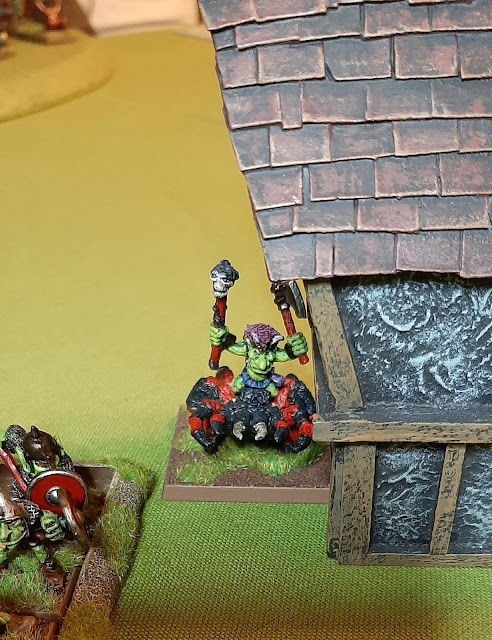 Heinrich rallied and turned to face Grumblebert Rumpystink.
The Crossbows also rallied with the Night Goblins right up in their faces. The Horse Archers fled the field. 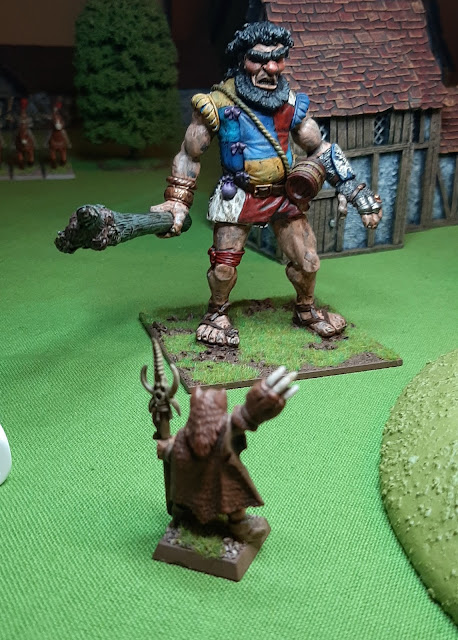 The cannon tried to snipe Rumpystink but whilst the cannonball flew straight and true, it failed to bounce.

The Pistoliers failed to wound Rumpystink also, and one Handgunner unit wounded one of Da Warta Boyz.
Dork's Tummy Rumblers only scored two wounds (despite 5 attacks hitting and only needing 2+ to wound) and the Fredericksburg Militia fluffed their attacks. In response Ugluk Da Choppa, Champion of Da Ed Takaz scored two wounds on the Ogres and Gitsmasha made a pulpy mess of the Fredericksburg Militia's Champion in single combat. Gorks Stompaz, powered by the Battle Stone of Le Marquis, slaughtered the front rank of Spearmen.

The Ogres held their ground but the Militia broke and fled, out pacing the Gitsmasha and his Big'uns but the Orcs momentum crashed them into Count Fredericks.

With that the game was effectively over but I thought I'd see if Count Frederiks could survive.
He challenged Gitsmasha in a desperate gamble to survive.
Gitsmasha was armed with a double-handed weapon so Count Frederiks struck first, he hit with two attacks and then wounded with both attacks meaning that, as he was armed with a Rending Blade, Gitsmasha fell!
The Big'uns lost the combat by 1 but didn't waiver, rolling 3 for their break test.
As night fell Count Frederiks set about fighting the odds to try to survive against the unimpressed bully boys.