A Gathering of Mighty Painters Month 6

"Five shinies on da Wyvern" said Gladruk.
"Nah, da Spider is clevera" bleated Grotslik.
"Shaddup bowf ov ya" shouted Gorfang.
They'd come across the Greenskin Shamen rather unexpectedly. The two were locked in combat, a crazed Goblin riding a Gigantic Spider and an Orc riding a mighty Wyvern that made the arachnid look like a mouse.
There should be no contest but the Goblin just wouldn't give up. Even as they watched on the Spider climbed a rock spire and scuttled along under an overhang. The Wyvern flew under the overhang searching for it prey. All of a sudden the Spider leapt down onto the Wyvern's head and held it's mouth shut with some of it's legs whilst the rest legs wrapped a web around it's mighty jaws. The Goblin, clinging on for dear life, looked up at the Orc and cackled maniacally.
The Orc made a guttural raw and tried smacking the diminutive greenskin with a grinning marotte and the Wyvern shock it's neck side to side trying to lose the Spider. Then, with a violent jerk, the Wyvern sent the Spider and it's gibbering rider flying off towards where Gorfang and his Boyz sat on the ridge of the valley.
Shortly after landing in a crumpled pile the Goblin stood up, the Spider limped away behind him. He started to twitch and then he started to convulse and green lightning shot out of his nose. He looked up, and saw Gorfang's growing horde, and smiled.
He started to chant something, turned around and beckoned to the sky. Green clouds materialised above the Orc on his Wyvern and a great green foot descended.
The Goblin held up his hand and the foot stopped.
"Ad enuff yet Wazgob?" he shouted.
"I'm gonna zoggin' kill ya Narflung" screamed the Orc.
"I gave ya a chanz" Narflung replied.
He pulled back his arm and flung it forward and with that the giant green foot pulled itself back and then kicked forward, booting the Wyvern out of the sky.
The Orc got up from where he and the Wyvern had landed. He put his hands on his knees and breathed in and out heavily.
"Old up ya Snotlin' Fiddla, me an Skreacha needz a breeva".
From behind the Golblin Gorfang began clapping.
"Ow yeaz" Gorfang said."Ave I got an oppatoonity for youz two".............................................. 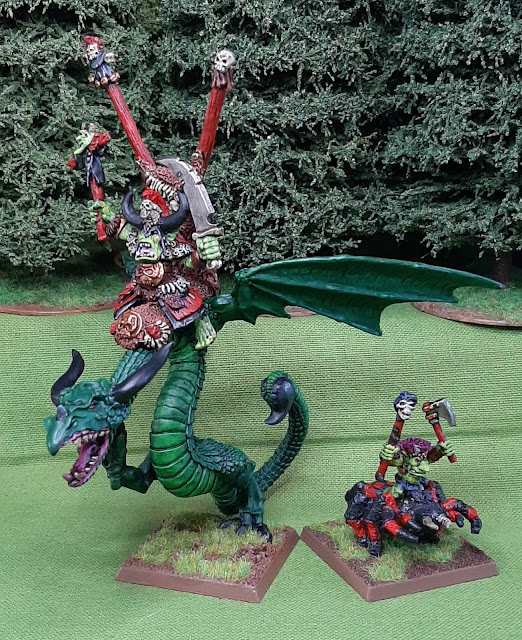 The penultimate month of the inaugural GOMP (Gathering of Mighty Painters) called for Characters to be painted and as I've already painted Gorfang (My General) I painted two of my three Shamen from the list I typed up before the challenge began. 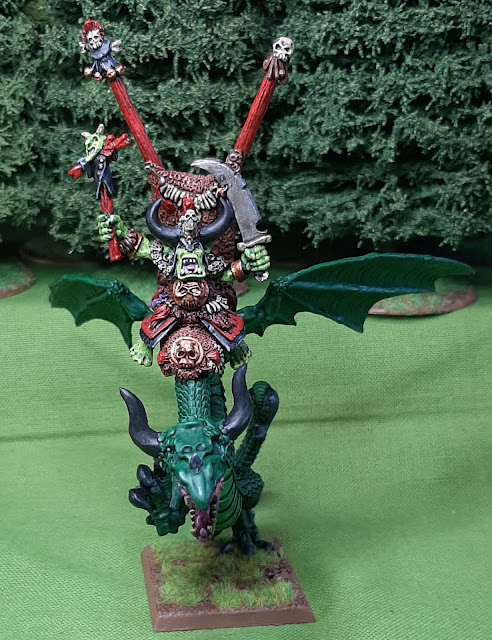 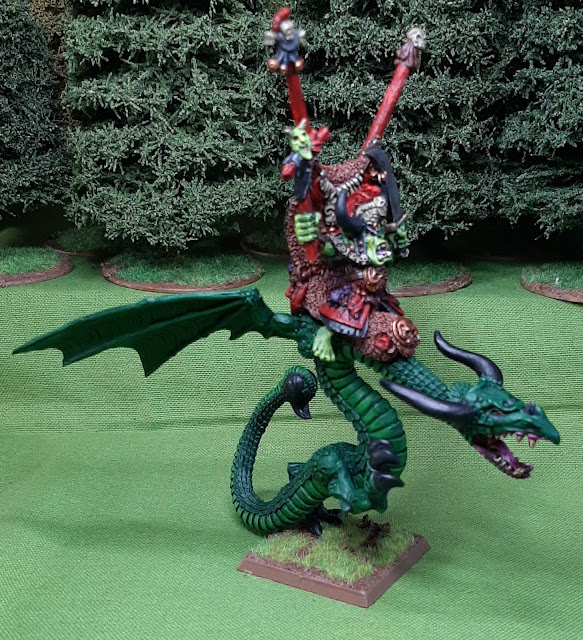 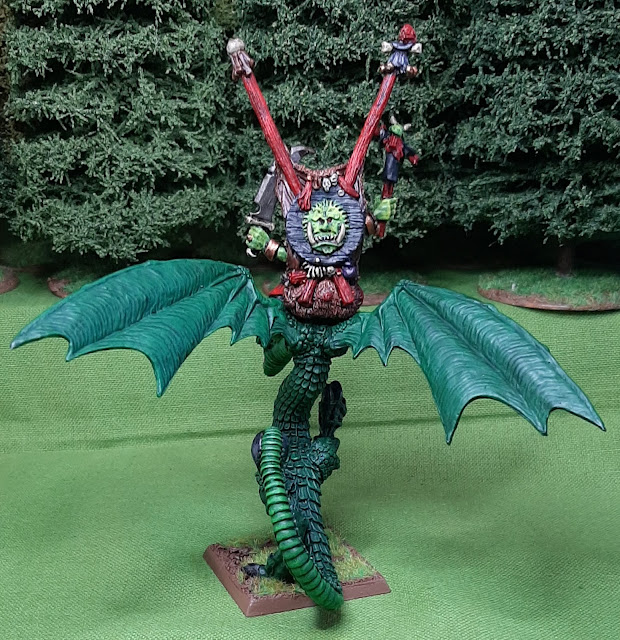 It's not the first time I've painted this Wyvern rider but I've always felt I could do better and as I had a second on lurking in the lead pile I thought this was a great opportunity to have another go whilst still having one painted should I need one for gaming (as it was I didn't, but if I hadn't of I would of). I think it shows a marked improvement in my painting, brighter colour use, highlighting (yup, historically I didn't because I don't see the whole "where the light would be shining thing", yes it sounds daft but I simply don't see it) and being a bit bolder 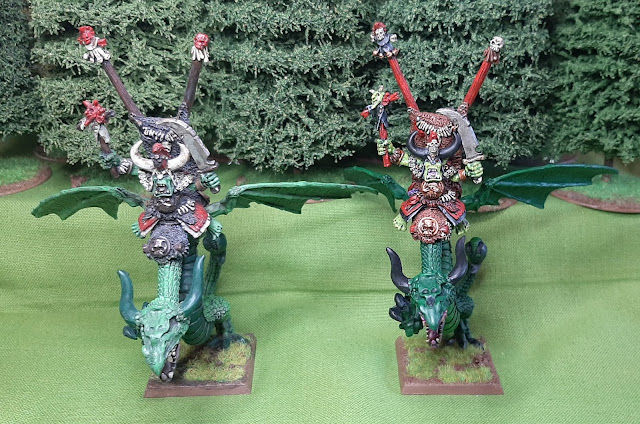 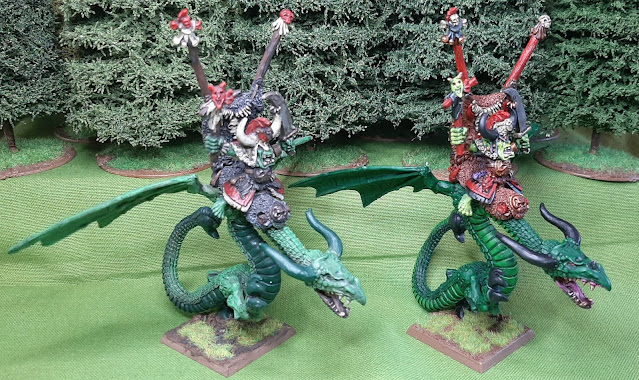 Next up is a 3rd Ed Marauder Spider Rider that was still available in 4th. I have the Hero to paint up too and am very excited at the prospect. These are two of the stand out cool minis from a truly awesome line of Orc and Goblin models. I'm excited to finally be putting paint on these guys, starting with the Shamen. I'm intrigued to know if he was based on Keith Richards. 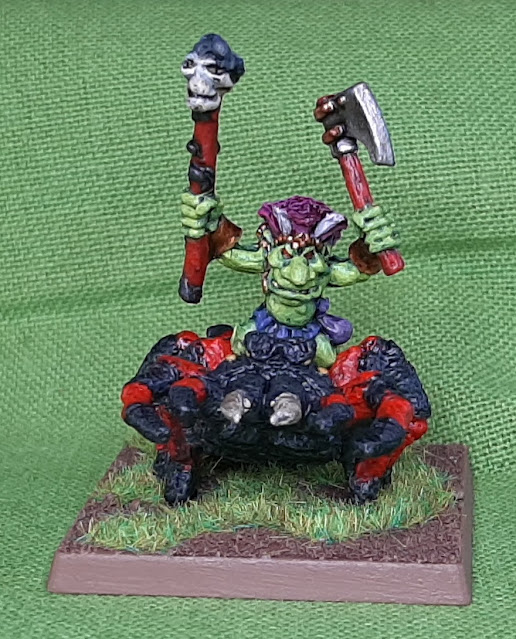 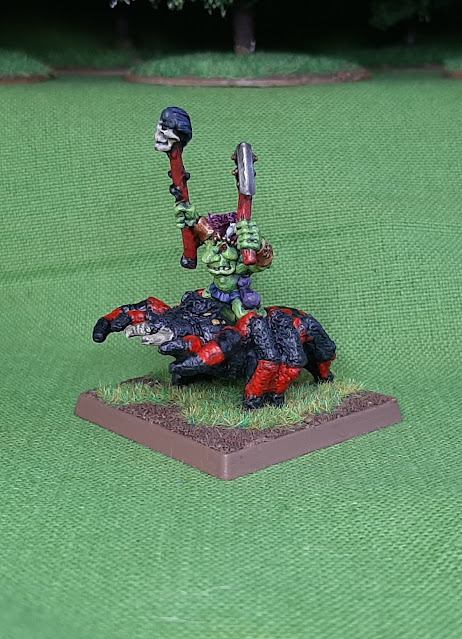 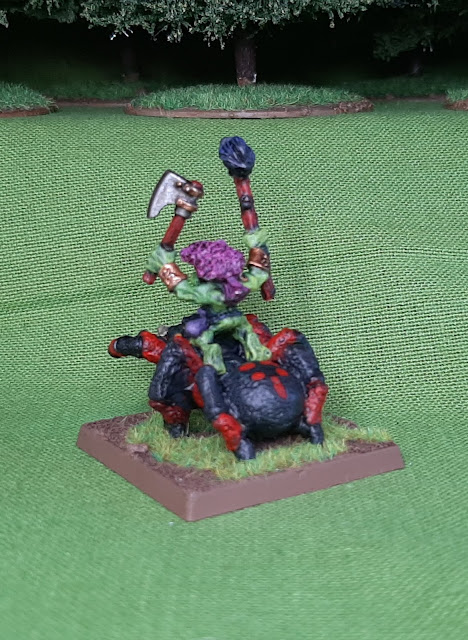 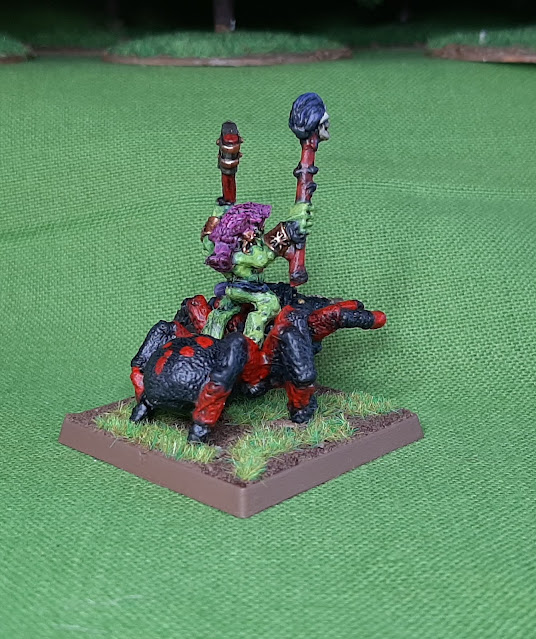 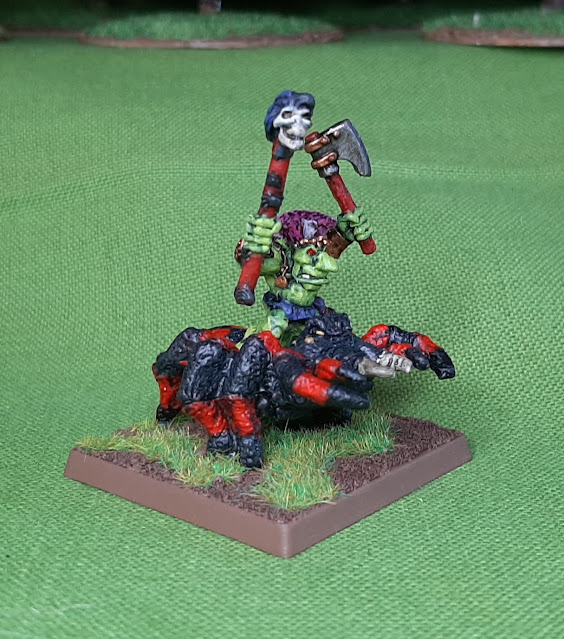 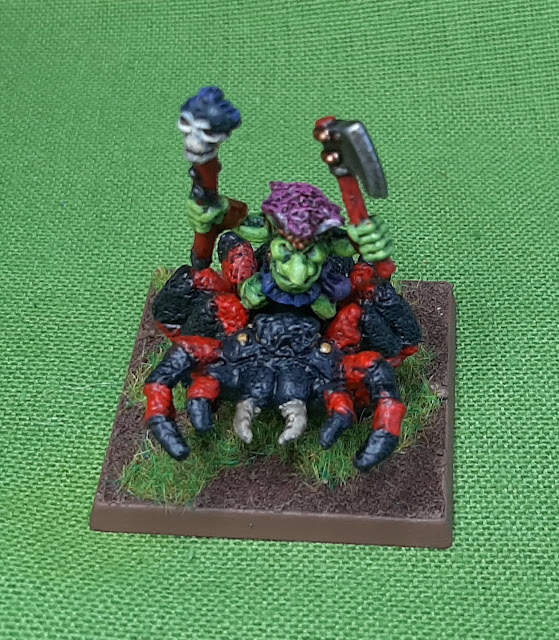 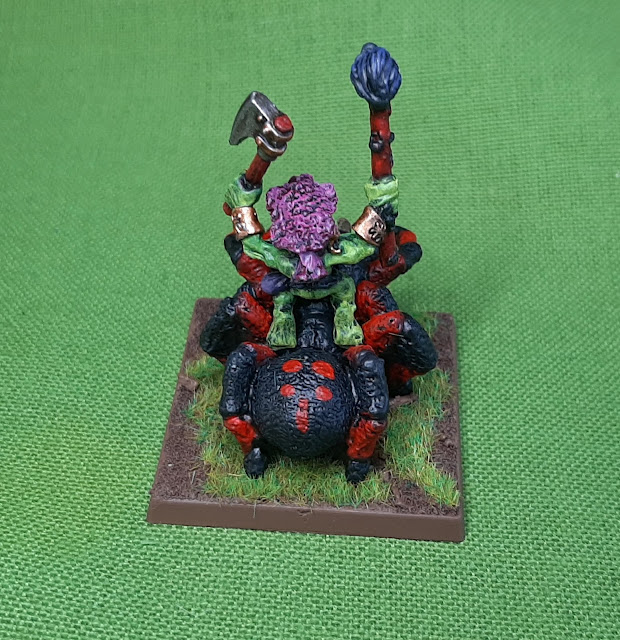 So, onto the last month's painting before I jump into BOYL Prep.
Posted by Snickit at 14:17:00